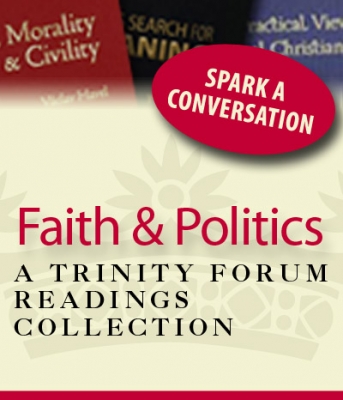 Politics, Morality, and Civility | Czech playwright and former President Václav Havel presents a clear look at the world situation and a call for our cultures and our leaders to rediscover or cultivate a morally grounded vision for the common good.

The Federalist Papers | During a time of increasing polarization, distrust in institutions, and civic fragmentation, it can be illuminating to revisit the ways in which some of the founders publicly wrestled with such challenges.

Letter from Birmingham Jail | Initially written on scraps of toilet paper and scratch paper during his time in jail, King’s letter articulates the urgency in redressing injustice, the interconnectedness of citizens, the necessity of discernment in responding rightly to unjust laws, and the demands of courage born of faith.

Democracy in America | French aristocrat Alexis de Tocqueville went to America to learn why democracy had succeeded there when it had failed elsewhere. This reading contains some of his most pointed insights.

To Bigotry No Sanction | In this excerpt George Washington writes on the subject of religious freedom and persecution, desiring “a Government which to bigotry gives no sanction, to persecution no assistance.”

Abraham Lincoln: The Spiritual Growth of a Public Man | Examines Lincoln’s spiritual journey in the midst of extraordinary hardship, opposition, and loss.